To all our guests and followers of our monthly newsletter a warm welcome from our wonderful part of the Kruger National park where we have the privilege of taking our wonderful guests on safari on this 10 000-hectare wilderness. Winter is now in full swing on the concession with water being very limited to the waterholes in front of the lodges. Guests are now able to enjoy sightings throughout the day of various species including Antelope, Lion, Leopard, large herds of Elephant and Buffalo. The bush is very dry at the moment with day still be pleasant but early mornings and late evenings very chilly to cold. Winter mornings are exceptionally beautiful at this time of the year with the mist hanging over the bush, and evening stars which give us chance to share the constellations with the guests in the evenings. The lunar eclipse was also experienced by all of our guests on the concession from the main decks of all three of the lodges as well as incredible views of Mars and Venus.

Sightings of Lion on the concession have once again left us guessing as to what is going on in terms of different prides all over the place and splinter groups of other Lions coming in and out of the property. The Avocas have made an appearance again on the south western parts of the concession as well as the Scorro Mbiri Male who has been seen mating with one of the Hamiltons Females. Another large male has also been seen in concession around Imbali Access a few times this month, moving between our concession and down as far as Shimangwaneni. All prides are still doing very well and cubs are growing up – Imbali pride, Torchwood Pride, Talamati breakaway pride and also the Hamiltons Pride.

Leopard have not been seen as often on drive as they have been at the waterholes in front of the camps at night time allowing guests to see them while drinking. Wabayisa our Hamiltons resident male seems to have moved out of Hamiltons area with the arrival of a larger male which has been seen on various occasions. Spook our resident Imbali male was seen close to Wabayisa through the month following him, Wabayisa gave him a wide birth not wanting to get into a fight with him and moved back South East into the Borehole block. Shidulu has now moved further South from Hamiltons and has only been seen once towards the end of the month. A female with a cub was spotted on a kill towards Broken Dam on the south western side of the concession, however being extremely skittish and was given plenty of space by guides and vehicles. Nkhanye our resident female leopard from Hamiltons has been seen recently but with only one cub, the only thing which we can surmise is that the young Male was killed.

A couple of nice sightings of cheetah this month, 2 males on a kill close to KNP Corner – south western parts of the concession. Female cheetah has been seen during the day drinking water at Hoyo Hoyo and also spotted on wedding plains. Not as many sightings as we have had around the concession, this may be because of the amount of Lion which we have in all sections of the concession which is causing them to remain hidden as well as the wild dogs and hyenas which are constantly moving around. 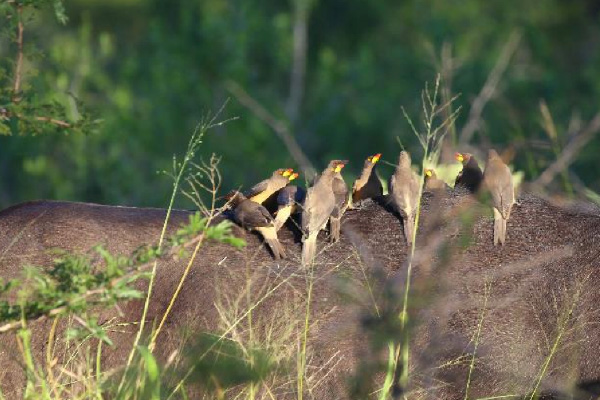 A rare and incredible sighting of Yellow Billed Oxpeckers here on the concession. 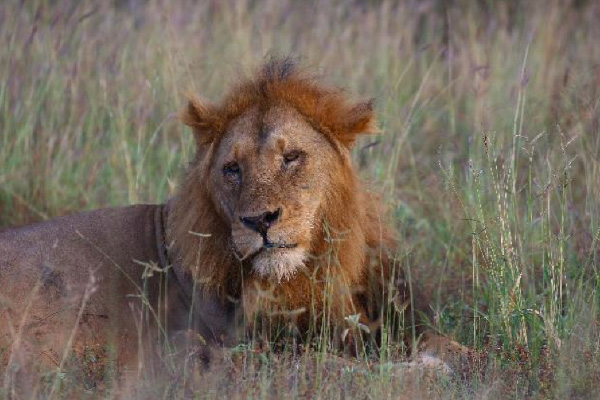 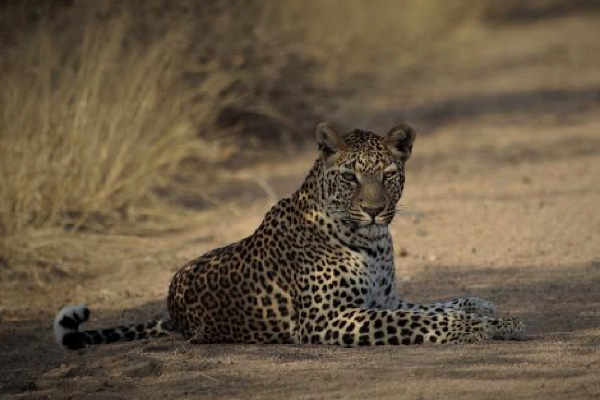 Shidulu relaxing on the S36 close to Hamiltons No Entry 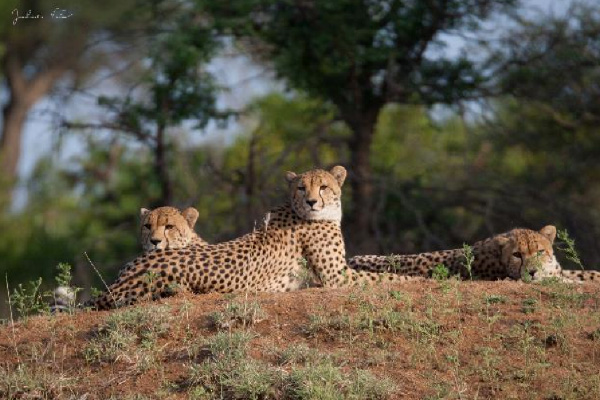 Keeping a look out from the top of a termite mound

The Hamiltons Pack have provided us with some incredible sightings especially around Imbali Lodge, Imbali staff village and also Imbali Waterhole. We have had sightings of the pups for the first time through the month being 13 in total. A group of 5 wild dogs have also been seen occasionally around Hamiltons not sure who they are or which pack they belonged to. Sightings which we had of the Leeupan Pack from Sabi Sands ended around Hamiltons with the pack denning in the block between Sabi Sands and S36. Constant updates of sightings are being sent through to EWT – Grant Beverley and also the State Vets. We will keep everyone updated as to the pups once they become more mobile at this stage they seem to be restricted to the den site and S36.

With the dry season peaking we are seeing plenty of Elephant and Dagga boys throughout the concession, Imbali sees a lot of bulls and big breeding herds coming throughout the day to drink water. Hamiltons had a herd of 75 through the month coming for water which was an amazing sighting for everyone. A lot of little elephants around at the moment and they are always entertaining to watch. Elephant Bulls tend to try and take charge of the waterholes in the midday, one incident at Imbali with Elephant bull pushing a buffalo down the embankment into the river bed in front of the main deck.

Birdlife on the concession is always interesting. Vultures have been nesting throughout this month, good sightings of Martial Eagle and also Verreaux Eagle Owls. Mluwati concession is lucky enough to have a few breeding pairs in different parts of the concession. Francolin and Spurfowl chicks are growing up quickly now, Ground Hornbills very active feeding and calling around Hamiltons and Imbali every morning and late afternoon. Purple Rollers are being seen in large numbers around concession since the departure of the European Rollers. African Barred Owlets nesting again at Imbali. Evening chorus includes Scops Owls, Pearl Spotted Owls, Fiery Neck Nightjar to mention a few.

The concession is teaming with wildlife at the moment from the smallest of animals and birds to the largest Elephant Bulls and Ostrich there is always something for everyone to enjoy. “May the call of the African Fish Eagle ring out through the savannas and may the roar of the lion vibrate through your soul….” 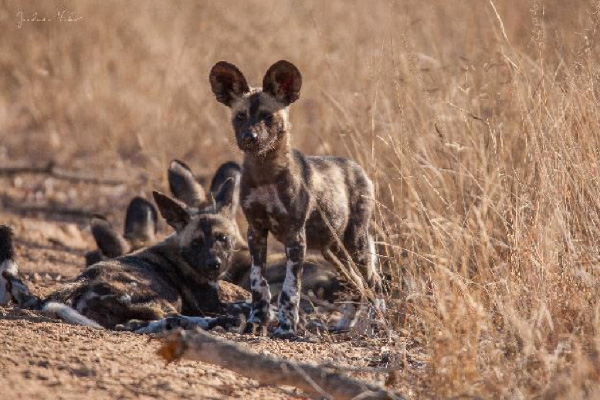 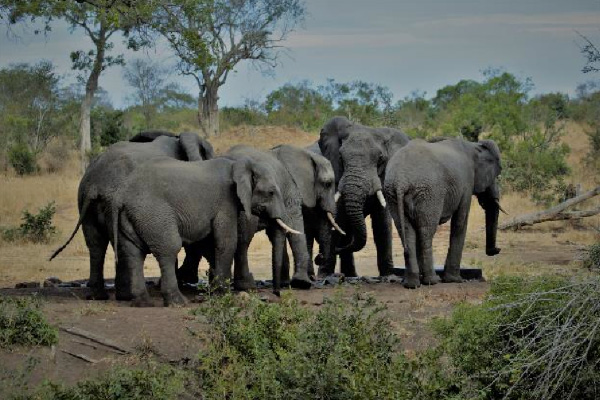 These Bulls make for a rather crowded waterhole 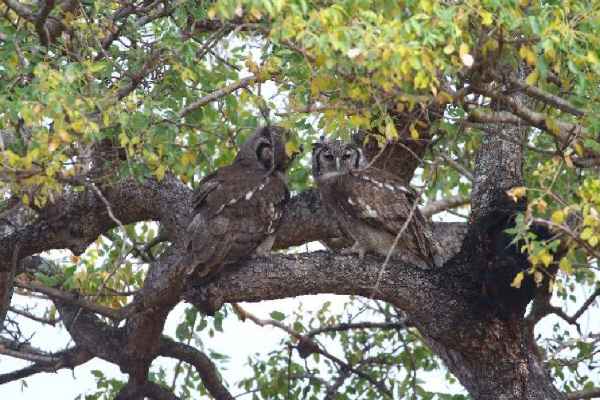